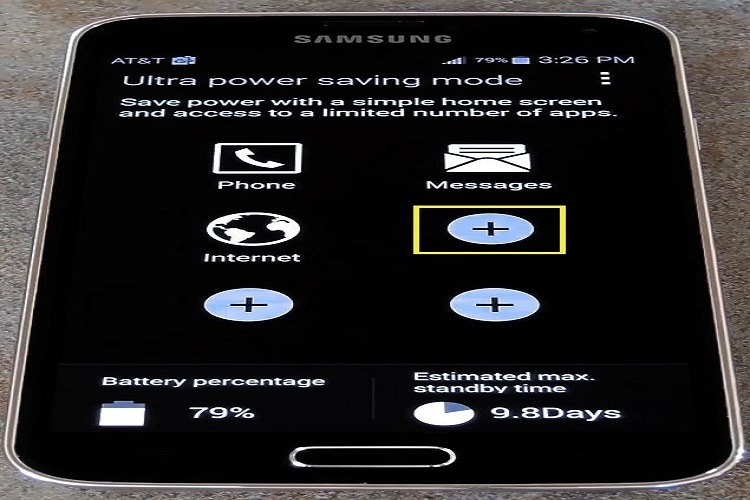 One of the new features offered by Samsung to the new Galaxy S5 is Ultra Power Saving Mode (UPSM). Actually, the power saving feature is not a new thing in the Android OS, previously there are several manufacturers like HTC which has been offering this feature as an attempt to deal with the Android device’s power usage. However, the UPSM can be regarded as the most innovative power saver feature, which never offered before.

We can use the Galaxy S5 Ultra Power Saving Mode (UPSM) to save and increase battery life, which means, no missing important phone calls or texts when the phone is running low on battery. This revolutionary feature will transforms the phone’s screen to grayscale and also kill almost all unneeded running process to limit battery usage. So, although the battery indicator shown below 15%, you’ve still got a 1.2 day estimated standby time under UPSM mode.

Unfortunately, for efficiency purposes, only a few basic apps that can only run under UPSM, such as phone, message, stock browser, calculator, memo, voice, recording and Google+. So, if your favorite apps is not in the allowed apps, then you should turn off UPSM, then look for phone charging stations.

However, there is an exception for a phone with root access, now you can add more apps to the Galaxy S5 Ultra Power Saving Mode, thanks to Arsaw – a recognized developer from xda – who build a mod for it.This mod will let you run Camera, Gallery, Google Chrome, Hangout and Torch app under UPSM. Additionally, you can also add your own apps under UPSM.